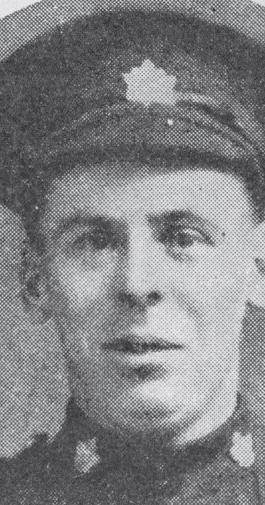 In the Battle of Arras, which began on 9 April 1917, troops of the Canadian Expeditionary Force were at the north of the line, where it ran along the foot of Vimy Ridge. The Ridge lay astride the road north from Arras towards Lens. The 4th Canadian Division advanced against the northern end of the Ridge, faced with capturing its highest ground, Hill 145 (site of the present Canadian Memorial) and The Pimple, a hill which formed the furthest extension north of the Ridge. The Pimple did not fall until the 12th (see Corporal J Cunningham VC below). In the course of the fighting at Hill 145 on the 9th, Captain T W MacDowell, 38th Battalion, assisted by two runners, Privates Hay and Kebus, captured a German underground emplacement, seventy-seven enemy soldiers and two machine-guns. He then held out for five days until relieved. In the line immediately to the south, east of the village of Neuville-St-Vaast, were the 3rd and 2nd Canadians. Lance Sergeant E W Sifton, Western Ontario Regiment, 2nd Canadian Division, captured an enemy gun in the attack here. At the southern end of the Ridge were the 1st Canadians. Thélus soon fell to them and they pressed on towards Farbus. It was at Thélus that Private W J Milne, 16th Battalion Manitoba Regiment, distinguished himself. On 10 April 1917, the Canadians sought to clear those parts of the Ridge east of Hill 145, where the Germans were mounting a tenacious resistance. It was during this action that Private J G Pattison, 50th Battalion Alberta Regiment, disabled an enemy machine-gun.

For most conspicuous bravery and devotion to duty in attack. On approaching the first objective, Pte. Milne observed an enemy machine gun firing on our advancing troops. Crawling on hands and knees, he succeeded in reaching the gun, killing the crew with bombs, and capturing the gun. On the line re-forming, he again located a machine gun in the support line, and stalking this second gun as he had done the first, he succeeded in putting the crew out of action and capturing the gun. His wonderful bravery and resource on these two occasions undoubtedly saved the lives of many of his comrades. Pte. Milne was killed shortly after capturing the second gun.