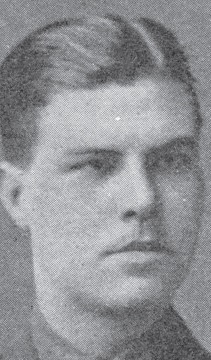 The third and easternmost of the German defensive positions at this point of the Hindenburg Line, ran past the village of Gavrelle on the far side of the southern end of Vimy Ridge about six miles east-north-east of Arras. On 23 April 1917 1st Battalion The Honourable Artillery Company took part in the capture of Gavrelle but the Germans retook it the following day. On 28 April the British attacked again and Second Lieutenant R L Haine and C Company were detailed to capture a German strongpoint just across the railway which ran north of the village. A number of assaults were unsuccessful but on the 29th Haine at last succeeded. Meanwhile, Second Lieutenant A O Pollard established himself in a trench to the north of Haine, to ward off a counter-attack. When this came, he not only repulsed it but managed to advance along 300 yards of enemy trench and clear it.

For most conspicuous bravery and determination, when our troops, occupying a pronounced salient, were repeatedly counter-attacked. There was an ever-present danger that if the enemy attack succeeded, the garrison of the salient would be surrounded. 2nd Lt. Haine organised and led with the utmost gallantry six bombing attacks against a strong point which dangerously threatened our communication, capturing the position together with fifty prisoners and two machine guns. The enemy then counter-attacked with a battalion of the Guard, succeeded in regaining his position, and the situation appeared critical. 2nd Lt. Haine at once formed a block in his trench, and for the whole of the following night maintained his position against repeated determined attacks. Reorganising his men on the following morning, he again attacked and captured the strong point, pressing the enemy back for several hundred yards, and thus relieving the situation. Throughout these operations, this Officer’s superb courage, quick decision and sound judgement were beyond praise, and it was his splendid personal example which inspired his men to continue their efforts during more than thirty hours of continuous fighting.