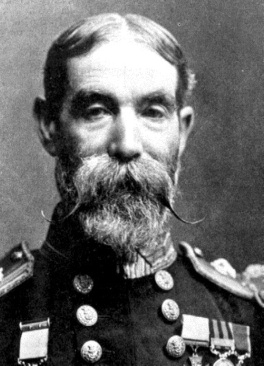 On 21 June 1854 the six-gun steam paddle sloop HMS Hecla commanded by Captain W H Hall RN, with two other ships, bombarded Bomarsund, the Russian fort on the Åland Islands at the mouth of the Gulf of Bothnia. The shore batteries fired back and a live shell landed on the Hecla’s upper deck. Mate Lucas threw it overboard, where it exploded before hitting the water. The ship sustained minor damage, but Lucas’ gallantry saved the crew from serious injury.

This Officer was promoted to his present rank on the 21st of June 1854, for his gallantry in throwing overboard a live shell, at the first attack on the batteries of Bomarsund. Captain Hall writes to Sir C. Napier:- “With regard to Mr. Lucas, I have the pleasure to report a remarkable instance of coolness and presence of mind in action, he having taken up, and thrown overboard, a live shell thrown on board the ‘Hecla’ by the enemy, while the fuze was burning.
(Letter of Captain Hall to Sir C. Napier, 22nd June, 1854.)

Sir Charles Napier, in forwarding Captain Hall’s letter, remarks:- “Their Lordships will observe, in Captain Hall’s letter, the great courage of Mr. C. D. Lucas, in taking up a live shell and throwing it overboard; and I trust their Lordships will mark their sense of it by promoting him.”
(Sir C. Napier to Secretary of Admiralty, 28th June, 1854.)