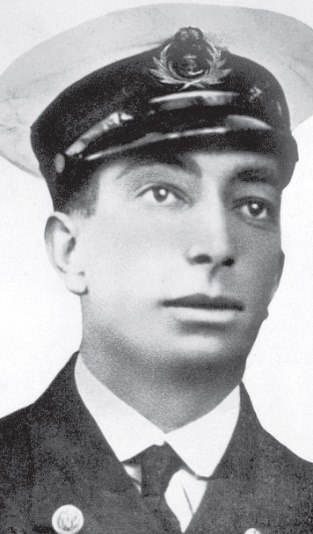 On 30 April 1917 about 180 miles south of Ireland, HMS Prize, a 200 ton three-masted topsail schooner, in fact a Q-ship posing as an unarmed trader, commanded by Lieutenant W E Sanders, was attacked by the German submarine U93, commanded by Freiherr Edgar Speigel von und zu Peckelsheim. When U93 approached to finish Prize off, Sanders opened fire causing so much damage it was assumed U93 had sunk. Unfortunately U93 was able to return to its home port. With Prize’s true nature revealed, it was later sunk with all hands by U48 on 14 August 1917.

In recognition of his conspicuous gallantry, consummate coolness, and skill in command of one of H.M. ships in action. (Second Supplement to The London Gazette of 22 June 1917. 22 June 1917, Numb. 30147, p. 6253) Admiralty, 20th November, 1918. With reference to announcements of the award of the Victoria Cross to naval officers and men for services in action with enemy submarines, the following are the accounts of the actions for which these awards were made:– (2) Action of H.M.S. “Prize” on the 30th April, 1917. H.M.S. “Prize,” a topsail schooner of 200 tons, under command of Lieutenant William Edward Sanders, R.N.R., sighted an enemy submarine on the 30th April, 1917. The enemy opened fire at three miles range and approached slowly astern. The “panic party,” in charge of Skipper William Henry Brewer, R.N.R. (Trawler Section), immediately abandoned ship. Ship’s head was put into the wind, and the guns’ crews concealed themselves by lying face downwards on the deck. The enemy continued deliberately shelling the schooner, inflicting severe damage and wounding a number of men. For 20 minutes she continued to approach, firing as she came, but at length, apparently satisfied that no one remained on board, she drew out on the schooner’s quarter 70 yards away. The white ensign was immediately hoisted, the screens dropped, and all guns opened fire. A shell struck the foremost gun of the submarine, blowing it to atoms and annihilating the crew. Another shot demolished the conning tower, and at the same time a Lewis gun raked the survivors off the submarine’s deck. She sank four minutes after the commencement of the action in clouds of smoke, the glare of an internal fire being visible through the rents in her hull. The captain of the submarine, a warrant officer and one man were picked up and brought on board the “Prize,” which was then herself sinking fast. Captors and prisoners, however, succeeded in plugging the shot holes and keeping the water under with the pumps. The “Prize” then set sail for the land, 120 miles distant. They were finally picked up two days later by a motor-launch and towed the remaining five miles into harbour. (The award of the Victoria Cross to Acting Lieutenant William Edward Sanders, R.N.R., was announced in London Gazette No. 30147, dated the 22nd June, 1917.)