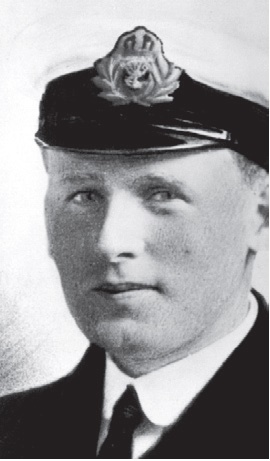 After the action on 17 February 1917, Commander G Campbell and most of his crew transferred to another Q-ship HMS Pargust, a converted collier. On 7 June 1917 she was attacked in the North Atlantic by UC29. Pargust succeeded in sinking the German submarine. The explosion when Pargust was torpedoed loosened the catches holding the starboard gun covers in place, threatening to betray the guns to the submarine. Seaman W Williams took their weight to prevent this, seriously injuring his back. The ship’s crew was allowed to nominate an officer and a seaman to receive the VC under Rule 13. Commander Campbell received a bar to his DSO for his part in the action. Campbell later requested that those men who had taken part in the ballot should receive a special certificate saying so on their discharge. He also asked for the ship’s name to be included in the list of VC winners. The Admiralty turned the latter request down, but in April 1920 agreed that the individuals concerned should have the details entered on their service files.

Admiralty, 20th November, 1918. With reference to announcements of the award of the Victoria Cross to naval officers and men for services in action with enemy submarines, the following are the accounts of the actions for which these awards were made:– (3) Action of H.M.S. “Pargust” on the 7th June, 1917. On the 7th June, 1917, while disguised as a British merchant vessel with a dummy gun mounted aft, H.M.S. “Pargust” was torpedoed at very close range. Her boiler-room, engineroom, and No. 5 hold were immediately flooded, and the starboard lifeboat was blown to pieces. The weather was misty at the time, fresh breeze and a choppy sea. The “panic party,” under the command of Lieutenant F. R. Hereford, D.S.C., R.N.R., abandoned ship, and as the last boat was shoving off, the periscope of the submarine was observed close before the port beam about 400 yards distant. The enemy then submerged, and periscope reappeared directly astern, passing to the starboard quarter, and then round to the port beam, when it turned again towards the ship, breaking surface about 50 yards away. The lifeboat, acting as a lure, commenced to pull round the stern; submarine followed closely and Lieutenant Hereford, with complete disregard of the danger incurred from fire of either ship or submarine (who had trained a maxim on the lifeboat), continued to decoy her to within 50 yards of the ship. The “Pargust” then opened fire with all guns, and the submarine, with oil squirting from her side and the crew pouring out of the conning tower, steamed slowly across the bows with a heavy list. The enemy crew held up their hands in token of surrender, whereupon fire immediately ceased. The submarine then began to move away at a gradually increasing speed, apparently endeavouring to escape in the mist. Fire was reopened until she sank, one man clinging to the bow as she went down. The boats, after a severe pull to windward, succeeded in saving one officer and one man. American Destroyers and a British sloop arrived shortly afterwards, and the “Pargust” was towed back to port. As on the previous occasions, officers and men displayed the utmost courage and confidence in their captain, and the action serves as an example of what perfect discipline, when coupled with such confidence, can achieve. (The award of the Victoria Cross to Lieut. Ronald Neil Stuart D.S.O., R.N.R., and Sea. William Williams, R.N.R., O.N., 6224A., was announced in London Gazette No. 30194, dated the 20th July, 1917.)