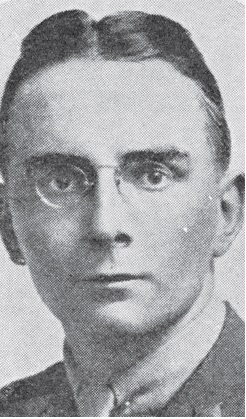 On 28 June 1917 three parties from C Company, 11th Battalion The Essex Regiment, together with a Company from 2nd Battalion The Durham Light Infantry, mounted a raid on the German line, east of Loos and north of Lens. The party commanded by Second Lieutenant F B Wearne was to guard the left flank of the main attacking party. It took a section of the German front line but was counter-attacked both down the front line and from the support trench. Wearne leapt onto the parapet of the trench, and ran along it firing at and bombing the enemy below. This temporarily repulsed the Germans, allowing the survivors amongst the British to withdraw as planned.

For most conspicuous bravery when in command of a small party on the left of a raid on the enemy’s trenches. He gained his objective in the face of much opposition and by his magnificent example and daring was able to maintain this position for a considerable time, according to instructions. During this period 2nd Lt. Wearne and his small party were repeatedly counter attacked. Grasping the fact that if the left flank was lost his men would have to give way, 2nd Lt. Wearne, at a moment when the enemy’s attack was being heavily pressed and when matters were most critical, leapt on the parapet and, followed by his left section, ran along the top of the trench, firing and throwing bombs. This unexpected and daring manoeuvre threw the enemy off his guard and back in disorder. Whilst on the top of the trench 2nd Lt. Wearne was severely wounded, but refused to leave his men. Afterwards he remained in the trench directing operations, consolidating his position and encouraging all ranks. Just before the order to withdraw was given, this gallant officer was again severely hit for the second time, and while being carried away was mortally wounded. By his tenacity in remaining at his post, though severely wounded, and his magnificent fighting spirit, he was enabled to hold on to the flank.