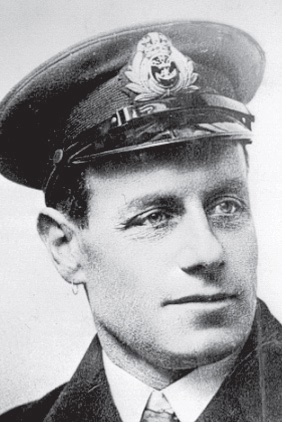 Since 1915 the Navy had armed a number of trawlers to act as decoys in the hunt for German submarines which had begun to attack the North Sea fishing fleet. On 15 August 1917, two of these special service smacks, the Nelson (formerly I’ll Try) and the Ethel and Millie, were fishing off the Jim Howe Bank in the North Sea when they were attacked by a U-boat. The range was too great for the Nelson’s gunner, Leading Seaman P Ross, to respond successfully and his skipper, Thomas Crisp, was mortally wounded by a shell which shattered both his legs and partially disembowelled him. Crisp’s son, also named Thomas, took over the boat but his father went on directing operations, eventually giving the order to abandon ship. He himself was too badly injured to be moved and went down with the Nelson. The remaining crew of eight were rescued after spending almost two days in an open boat. The Ethel and Millie and its crew were never seen again. Leading Seaman Ross received a bar to his DSM for the action, and Thomas Crisp the younger was awarded the DSM.

Honours for Services in Action with Enemy Submarines. The KING has been graciously pleased to approve of the award of the following honours, decorations and medals to officers and men for services in action with enemy submarines:– Posthumous Award of the Victoria Cross. Skipper Thomas Crisp, R.N.R., 10055D.A. (killed in action). (Fifth Supplement to The London Gazette of 30 October 1917. 2 November 1917, Numb. 30363, p. 11315) Admiralty, 20th November, 1918. With reference to announcements of the award of the Victoria Cross to naval officers and men for services in action with enemy submarines, the following are the accounts of the actions for which these awards were made:– (5) Action of H.M. Armed Smack “Nelson,” on the 15th August, 1917. On the 15th August, 1917, the Smack “Nelson” was engaged in fishing when she was attacked by gunfire from an enemy submarine. The gear was let go and the submarine’s fire was returned. The submarine’s fourth shot went through the port bow just below the water line, and the seventh shell struck the skipper, Thomas Crisp, partially disembowelling him, and passed through the deck and out through the side of the ship. In spite of the terrible nature of his wound Skipper Crisp retained consciousness, and his first thought was to send off a message that he was being attacked and giving his position. He continued to command his ship until the ammunition was almost exhausted and the smack was sinking. He refused to be moved into the small boat when the rest of the crew were obliged to abandon the vessel as she sank, his last request being that he might be thrown overboard. (The posthumous award of the Victoria Cross to Skipper Thomas Crisp, D.S.C., R.N.R., 10055 D.A., was announced in London Gazette No. 30363, dated the 2nd November, 1917.)