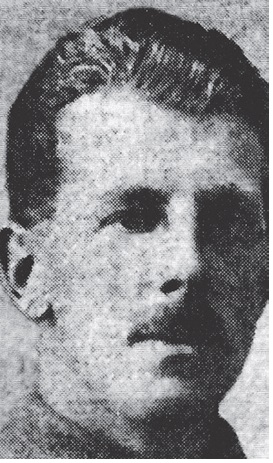 For most conspicuous bravery and devotion to duty during the operations against the enemy positions. Sjt. Knight did extraordinary good work, and showed exceptional bravery and initiative when his platoon was attacking an enemy strong point, and came under very heavy fire from an enemy machine gun. He rushed through our own barrage, bayonetted the enemy gunner, and captured the position single-handed. Later, twelve of the enemy with a machine gun, were encountered in a shell-hole. He again rushed forward by himself, bayonetted two and shot a third and caused the remainder to scatter. Subsequently, during the attack on a fortified farm, when entangled up to his waist in mud, and seeing a number of the enemy firing on our troops, he immediately opened fire on them without waiting to extricate himself from the mud, killing six of the enemy. Again, noticing the company on his right flank being held up in their attack on another farm, Sjt. Knight collected some men and took up a position on the flank of this farm, from where he brought a heavy fire to bear on the farm as a result of which the farm was captured. All the platoon officers of the company had become casualties before the first objective was reached, and this gallant N.C.O. took command of all the men of his own platoon and of the platoons without officers. His energy in consolidating and reorganising was untiring. His several single-handed actions showed exceptional bravery, and saved a great number of casualties in the company. They were performed under heavy machine gun and rifle fire, and without regard to personal risk, and were the direct cause of the objectives being captured.