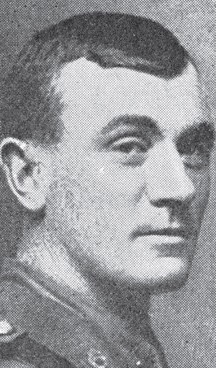 For most conspicuous bravery when his company in attack and approaching their final objective, suffered heavy casualties from enemy machine guns and from an enemy “Pill-box” which had been passed by the first wave. Capt. Reynolds reorganised his men who were scattered, and then proceeded alone by rushes from shell hole to shell hole, all the time being under heavy machine gun fire. When near the “Pill-box” he threw a grenade intending that it should go inside, but the enemy had blocked the entrance. He then crawled to the entrance and forced a phosphorous grenade inside. This set the place on fire and caused the death of three of the enemy while the remainder, seven or eight, surrendered with two machine guns. Afterwards, though wounded, he continued to lead his company against another objective, and captured it taking seventy prisoners and two more machine guns. During the whole attack the company was under heavy machine gun fire from the flanks, but despite this Capt. Reynolds kept complete control of his men.