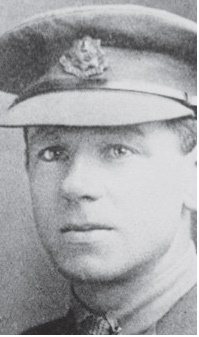 For most conspicuous bravery in attack. When all the officers of his company except himself – and all but one in the leading company – had become casualties and losses were heavy, he assumed command of both companies and led them forward under heavy machine gun fire with great dash and success. He saw the battalion on his right held up by machine gun fire, and led a platoon to their assistance. 2nd Lt. Colvin then went on with only two men to a dug-out. Leaving the men on top, he entered it alone and brought up fourteen prisoners. He then proceeded with his two men to another dug-out which had been holding up the attack by rifle and machine gun fire and bombs. This he reached and, killing or making prisoners of the crew, captured the machine gun. Being then attacked from another dug-out by fifteen of the enemy under an officer, one of his men was killed and the other wounded. Seizing a rifle he shot five of the enemy, and, using another as a shield, he forced most of the survivors to surrender. This officer cleared several other dug-outs alone or with one man, taking about fifty prisoners in all. Later, he consolidated his position with great skill, and personally wired his front under heavy close range sniping in broad daylight, when all others had failed to do so. The complete success of the attack in this part of the line was mainly due to 2nd Lt. Colvin’s leadership and courage.