Born in 1983 and brought up in Birmingham, Matt served in Royal Marines from 2000 – 2005 when he transferred into the RM Reserve. He has undertaken three tours in Iraq and one in Afghanistan when he was attached to 40 Commando as a Reconnaissance Operator and Heavy Weapons Specialist. When not undertaking duties with the RMR he is a Director of a Security and Risk Management company. Matt remains active in a number of charities, Patron of the Lee Rigby foundation, Ambassador for the Royal British Legion and he has also recently set up an anti-poaching charity working predominantly in Africa, Action Against Poaching. 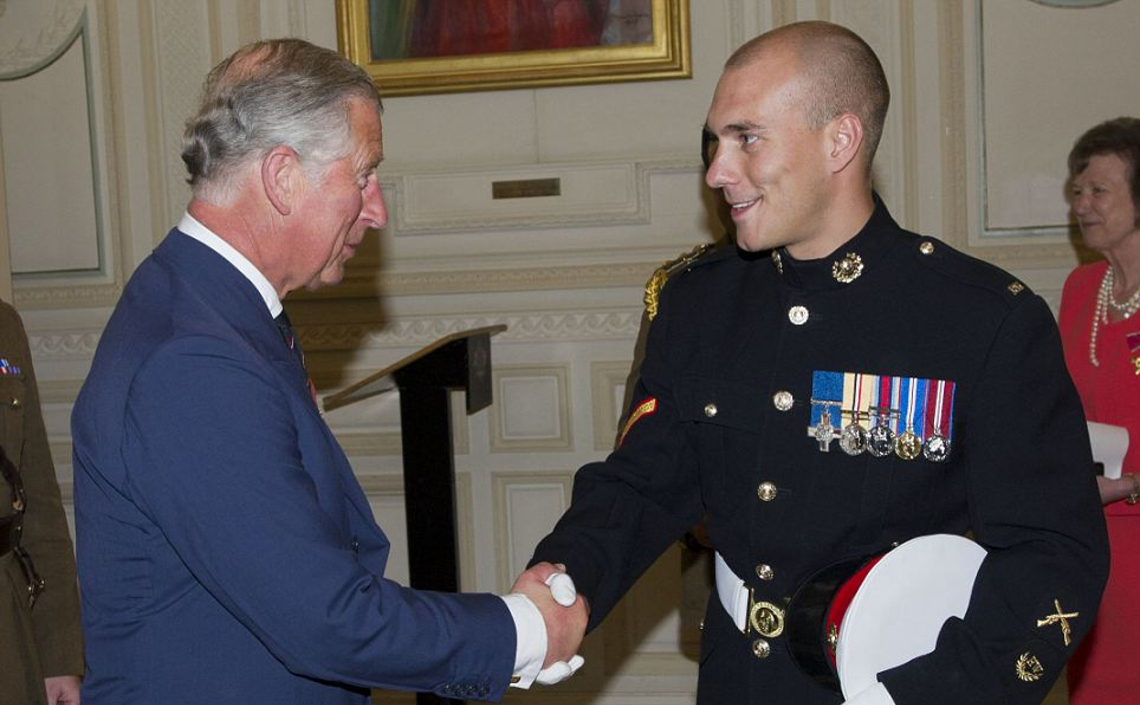 Throughout December 2007 and January 2008, forward Operating Base ROBINSON, an International Security Assistance Force/Afghanistan National Army location situated 10km to the south of Sangin, had been targeted relentlessly by an enemy seeking to inflict death and grievous injury on Coalition Forces. Complex and highly effective improvised explosive devices had been deployed by the Taliban throughout the Forward Operating Base’s area of responsibility with deadly success. Movement around the Forward Operating Bast location was fraught with danger and exceptionally high risk for troops, whether vehicle borne or operating on foot. Tasked with conducting both overt and covert patrolling to disrupt and interdict enemy forces, 40 Commando Battle Group was determined to regain the initiative.

Lance Corporal Croucher was deployed to Helmand Province, Afghanistan as a reconnaissance operator in 40 Commando Group’s Commando Reconnaissance Force, elements of which were operating from Forward Operating Base ROBINSON.

On 9th February 2008, the Commando Reconnaissance Force was tasked to conduct reconnaissance of a compound in which it was suspected that Taliban fighters manufactured Improvised Explosive Devices. Lance Corporal Croucher’s section was deployed on this highly dangerous and challenging operation. In the early hours, utilising night vision devices and under constant threat of attack from Improvised Explosive Devices or enemy ambush, the Commando Reconnaissance Force successfully negotiated the complex and varied terrain between the Forward Operating Base and the suspect compound, and established an over-watch position to observe for any sign of activity.

In order to determine conclusively that the compound was an Improvised Explosive Device manufacturing site, the decision was made to send a small four man team, which included Lance Corporal Croucher, forward to conduct a very high risk “close target reconnaissance”. This required the team to enter the compound. It was believed to be occupied. The team moved forward with extreme caution and stealth and successfully gained entry into the compound without incident. After 30 minutes on task, and having identified numerous items that could be used by insurgents to manufacture Improvised Explosive Devices, the team commander gave the order for the team to extract back to their pre-arranged rendezvous point with the remainder of Commander Reconnaissance Force.

Lance Corporal Croucher was at the head of the group as they commenced the extraction; behind him, approximately 5 metres away, the Team Commander and another Marine were in the open and fully exposed, with the fourth team member a short distance behind them. As the team moved silently through the still darkened compound, Lance Corporal Croucher felt a wire go tight against his legs, just below knee height. This was a tripwire connected to a grenade booby-trap, positioned to kill or maim intruders in the compound. He heard the fly-off lever eject and the grenade, now armed, fell onto the ground immediately beside him.

Instantly realising what had occurred, Lance Corporal Croucher made a crucial and incredibly rapid assessment of the situation. With extraordinary clarity of thought and remarkable composure, he shouted “Grenade”, then “Tripwire” in an attempt to warn his comrades to find cover before the grenade exploded. It was clear to him that given the lack of cover in the immediate vicinity, he and the other team members were in extreme danger.

Due to low light levels, he was unable to determine the type of grenade and therefore had no way of knowing how long the device’s fuse would take to function. With his comrades totally exposed and time running out, Lance Corporal Croucher made the decision not to seek cover or protection for himself, but to attempt to shield the other members of his team from the impending explosion. In an act of great courage and demonstrating a complete disregard for his own safety, he threw himself on top of the grenade, pinning it between his day sack, containing his essential team stores, and the ground. Quite prepared to make the ultimate sacrifice for his fellow Marines, Lance Corporal Croucher lay on the grenade and braced himself for the explosion. Meanwhile, the Team Commander, upon hearing the initial shouted warning, dived to the ground. The rear man in the team was able to take cover by stepping back around the corner of a building; the other team member was unable to react quickly enough and was still upright, fully exposed within the lethal range of the grenade.

As it detonated, the blast effect of the grenade was absorbed by Lance Corporal Croucher and the majority of the fragmentation was contained under his body. Miraculously, his equipment and protective clothing prevented any lethal shards hitting his body and he suffered only minor injury and disorientation from the effects of the blast. Lance Corporal Croucher’s day sack was ripped from his back and was completely destroyed; his body armour and helmet were pitted by the grenade fragments. A large battery being carried in the side pouch of his day sack, for his team’s Electronic Counter Measures equipment, also exploded and was burning like a flare as a result of the grenade fragments breaching the outer case. Incredibly, the only other injury was a slight fragmentation wound to the Team Commander’s face. The others escaped unscathed. Without question, Lance Corporal Croucher’s courageous and utterly selfless action had prevented death or serious injury to at least two members of his team. Immediately following the explosion they manoeuvred tactically back to their rendezvous location. After confirming with the Troop Commander that no significant casualties had been sustained, the decision was made to enterdict enemy forces attempting to conduct a follow-up to the incident. As anticipated, enemy activity was observed by the Commando Reconnaissance Force and Lance Corporal Croucher, having refused to be evacuated, along with other members of his team, engaged and neutralized one enemy fighter.

Throughout his service in Afghanistan, Lance Corporal Croucher has served with the utmost distinction. His actions on 9 February 2008, when he willingly risked his own life in a most deliberate act of self-sacrifice to save his comrades from death or serious injury, were wholly typical of the man. During a previous engagement at Forward Operating Base Inkerman on 9 November 2007, Lance Corporal Croucher helped save the life of a fallen comrade who had received a serious gunshot wound to the chest during a ferocious fire-fitht with the enemy. For twenty minutes, whilst the company medical assistant was pinned down by enemy fire, he applied life-saving first aid which stabilised the wounded man until medical assistance arrived and the casualty could be extracted. Meanwhile, on 16 November 2007, whilst providing intimate security to a night air drop in the desert near Forward Operating Base Inkerman, Lance Corporal Croucher was injured in a road traffic accident. Evacuated to the UK with a suspected broken leg, he was determined to return to theatre and, following intense physiotherapy, he returned within a matter of weeks to resume his duties with Commando Reconnaissance Force.

That he was willing to risk all in order to save the lives of his comrades is indisputable; that he possesses an indomitable fighting spirit is abundantly clear. Lance Corporal Croucher is an exceptional and inspirational individual. His magnificent displays of selflessness and gallantry are truly humbling and are the embodiment of the finest traditions of the Service.