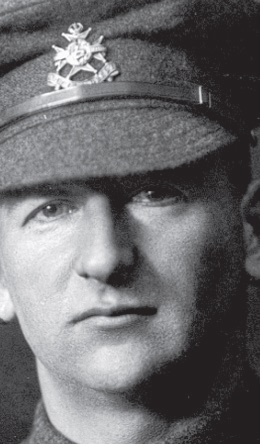 For most conspicuous bravery, initiative and leadership, when his platoon was temporarily held up by machine-gun fire from a concrete stronghold. Seeing that his platoon commander and serjeant were casualties, and realising that unless this post was taken quickly his men would lose the barrage, Cpl. Greaves, followed by another non-commissioned officer, rushed forward regardless of his personal safety, reached the rear of the building and bombed the occupants, killing or capturing the garrison, and taking four enemy machine-guns. It was solely due to the personal pluck, dash and initiative of this non-commissioned officer that the assaulting line at this point was not held up, and that our troops escaped serious casualties. Later in the afternoon, at a most critical period of the battle, when the troops of a flank brigade had given way temporarily under a heavy counter-attack and when all the officers in his company were casualties, this gallant non-commissioned officer quickly grasped the situation. He collected his men, threw out extra posts on the threatened flank, and opened up rifle and machine-gun fire to enfilade the advance. The effect of Cpl. Greaves’ conduct on his men throughout the battle cannot be over-estimated, and those under his command responded gallantly to his example.