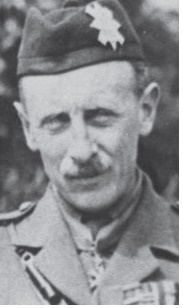 For most conspicuous bravery and leadership. Lt.-Col. Evans took his battalion in perfect order through a terrific enemy barrage, personally formed up all units, and led them to the assault. While a strong machine gun emplacement was causing casualties, and the troops were working round the flank, Lt.-Col. Evans rushed at it himself and by firing his revolver through the loophole, forced the garrison to capitulate. After capturing the first objective he was severely wounded in the shoulder, but refused to be bandaged, and re-formed the troops, pointed out all future objectives, and again led his battalion forward. Again badly wounded, he nevertheless continued to command until the second objective was won, and, after consolidation, collapsed from loss of blood. As there were numerous casualties, he refused assistance, and by his own efforts ultimately reached the Dressing Station. His example of cool bravery stimulated in all ranks the highest valour and determination to win.