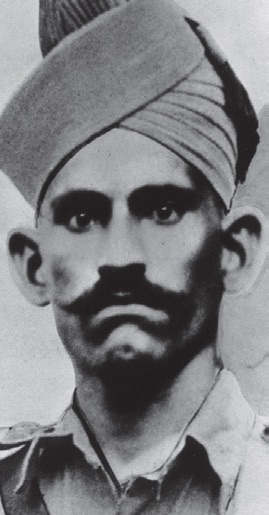 In March 1944 the Japanese launched a major offensive against the British in Assam. If successful, this would have opened the way for their advance into India. The British were forced to withdraw into the plain around Imphal, the capital of Manipur. There was also a garrison at Kohima on the road north to the Bengal-Assam railway at Dimapur. By 4 April the Japanese had reached Kohima. The British were preparing to counter-attack north from Imphal towards Kohima, while the enemy were seeking to tighten their grip on the enclave round Imphal. On 6 April 1944 a Japanese unit took Nungshigum Hill, a strategically important feature fourteen miles north-east of Imphal but were driven off it by the 3/9th Jats. On the 11th the enemy recaptured it but were finally expelled on 13 April. However, the Japanese siege of Imphal was not to be lifted until 22 June.

In Burma, in the early hours of the 6th April, 1944, in the hills 10 miles North of Imphal, the enemy had attacked a standing patrol of 4 men and occupied a prominent feature overlooking a Company position. At first light a patrol was sent out and contacted the enemy, reporting that they thought approximately 40 enemy were in the position. It was not known if they had dug in during the hours of darkness. The Company Commander ordered Jemadar Abdul Hafiz to attack the enemy, with two sections from his platoon, at 0930 hours. An artillery concentration was put down on the feature and Jemadar Abdul Hafiz led the attack. The attack was up a completely bare slope with no cover, and was very steep near the crest. Prior to the attack, Jemadar Abdul Hafiz assembled his sections and told them that they were invincible, and all the enemy on the hill would be killed or put to flight. He so inspired his men that from the start the attack proceeded with great dash. When a few yards below the crest the enemy opened fire with machine-guns and threw grenades. Jemadar Abdul Hafiz sustained severe casualties, but immediately ordered an assault, which he personally led, at the same time shouting the Mohammedan battle cry. The assault went in without hesitation and with great dash up the last few yards of the hill, which was very steep. On reaching the crest Jemadar Abdul Hafiz was wounded in the leg, but seeing a machine-gun firing from a flank, which had already caused several casualties, he immediately went towards it and seizing the barrel pushed it upwards, whilst another man killed the gunner. Jemadar Abdul Hafiz then took a Bren gun from a wounded man and advanced against the enemy, firing as he advanced, and killing several of the enemy. So fierce was the attack, and all his men so inspired by the determination of Jemadar Abdul Hafiz to kill all enemy in sight at whatever cost, that the enemy, who were still in considerable numbers on the position, ran away down the opposite slope of the hill. Regardless of machine-gun fire which was now being fired at him from another feature a few hundred yards away, he pursued the enemy, firing at them as they retired. Jemadar Abdul Hafiz was badly wounded in the chest from this machinegun fire and collapsed holding the Bren gun and attempting to fire at the retreating enemy, and shouting at the same time “Re-organise on the position and I will give covering fire”. He died shortly afterwards. The inspiring leadership and great bravery displayed by Jemadar Abdul Hafiz in spite of having been twice wounded, once mortally, so encouraged his men that the position was captured, casualties inflicted on the enemy to an extent several times the size of his own party, and enemy arms recovered on the position which included 3 Lewis Machine-guns, 2 grenade dischargers and 2 officers’ swords. The complete disregard for his own safety and his determination to capture and hold the position at all costs was an example to all ranks, which it would be difficult to equal.