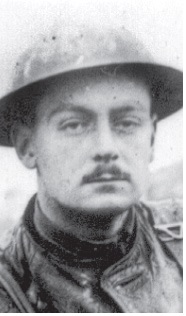 After the failed advance on 12 October 1917, Sir Douglas Haig brought in Lieutenant General Sir Arthur Currie and the Canadian Expeditionary Force. On 26 October he launched the Second Battle of Passchendaele. The Canadian 4th Division advanced south of the Ravebeek, which the rains had turned into a quagmire. At the same time two brigades of 3rd Division attacked the Bellevue and Wallemollen spurs to the north of the stream. Bellevue was crossed by the road from Ypres through Meetcheele to Oostnieuwkerke. North of the road, 4th Canadian Mounted Rifles found their path blocked by a pillbox north of Wolf Copse. This was captured by Private T W Holmes. Elsewhere the advance encountered heavy resistance but Lieutenant R Shankland, 43rd Battalion Manitoba Regiment, succeeded in establishing a position on the crest of Bellevue Ridge, though for a time he was out of contact with headquarters. After the initial attack appeared to have stalled, reserves including 52nd Battalion The Manitoba Regiment, were brought forward and managed to clear German pillboxes and repel counter-attacks. Acting Captain C P J O’Kelly distinguished himself in this work. The Canadians thus laid the groundwork for the second phase of the Battle on 30 October.

For most conspicuous bravery in an action in which he led his company with extraordinary skill and determination. After the original attack had failed and two companies of his unit had launched a new attack, Capt. O’Kelly advanced his command over 1,000 yards under heavy fire without any artillery barrage, took the enemy positions on the crest of the hill by storm, and then personally organised and led a series of attacks against “Pill-boxes,” his company alone capturing six of them with 100 prisoners and 10 machine guns. Later on in the afternoon, under the leadership of this gallant officer, his company repelled a strong counter-attack, taking more prisoners, and subsequently during the night captured a hostile raiding party consisting of one officer, 10 men and a machine gun. The whole of these achievements were chiefly due to the magnificent courage, daring and ability of Capt. O’Kelly.