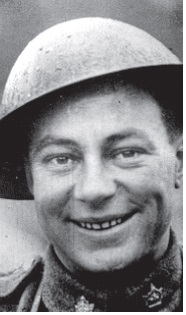 For most conspicuous bravery in attack, when single-handed he captured a commanding “Pillbox” which had withstood the heavy bombardment and was causing heavy casualties to our forces and holding up the attack. He rushed a sniper’s post in front, destroyed the garrison with bombs, and, crawling on to the top of the “Pill-box,” he shot the two machine-gunners with his revolver. Sjt. Mullin then rushed to another entrance and compelled the garrison of ten to surrender. His gallantry and fearlessness were witnessed by many, and, although rapid fire was directed upon him, and his clothes riddled by bullets, he never faltered in his purpose and he not only helped to save the situation, but also indirectly saved many lives.