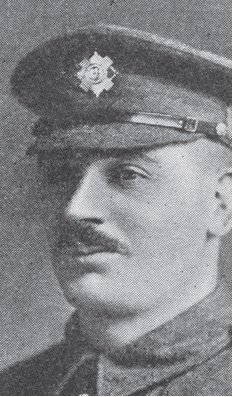 From 23 to 28 November 1917 the Battle of Cambrai centred on the British attempt to capture Bourlon Wood on a ridge due west of Cambrai. On 27 November 1917, 1st Battalion Scots Guards took part in an unsuccessful assault on Fontaine-Notre-Dame, astride the Cambrai-Bapaume road, south-east of Bourlon Wood. One company was sent along the sunken road north from Cantaing to try and link up with the Grenadier Guards in the village but came under very heavy enemy machine-gun fire. When all his officers had become casualties, Sergeant J McAulay assumed command and beat back an enemy counter- attack. He also carried his dying company commander, Lieutenant Kinnaird, more than 500 yards to safety.

For most conspicuous bravery and initiative in attack. When all his officers had become casualties Serjt. McAulay assumed command of the company and under shell and machine-gun fire successfully held and consolidated the objective gained. He reorganised the company, cheered on and encouraged his men, and under heavy fire at close quarters showed utter disregard of danger. Noticing a counter-attack developing on his exposed left flank, he successfully repulsed it by the skilful and bold use of machine-guns, aided by two men only, causing heavy enemy casualties. Serjt. McAulay also carried his company commander, who was mortally wounded, a long distance to a place of safety under very heavy fire. Twice he was knocked down by the concussion of a bursting shell, but, nothing daunted, he continued on his way until his objective was achieved, killing two of the enemy who endeavoured to intercept him. Throughout the day this very gallant Non-commissioned Officer displayed the highest courage, tactical skill, and coolness under exceptionally trying circumstances.