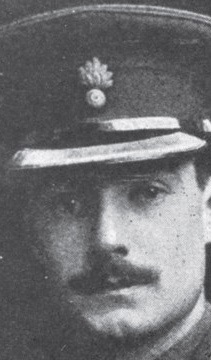 After the German advance on 30 November 1917 during the Battle of Cambrai, the British counter-attacked on 1 December. 4th Battalion Grenadier Guards attempted to recapture Gonnelieu, just south of the Péronne-Cambrai road, south-west of Bonavis, which had fallen to the enemy the preceding day. During this action, Acting Captain G H T Paton commanded the support company. The attack failed but it prevented the Germans from advancing out of Gonnelieu. Meanwhile to the south, the British mounted several cavalry attacks south of Gauche Wood towards Villers-Guislain which had also been captured by the Germans the day before. One of these involved 2nd Lancers (Gardner’s Horse), 5th (Mhow) Cavalry Brigade. They came under very heavy fire and were soon pinned down. Lance Dafadar Gobind Singh carried a report on the position to Brigade HQ and brought back the reply. He then carried another report back to the HQ but was refused permission to return to the front. His regiment eventually completed a successful withdrawal after nightfall.

For most conspicuous bravery and self-sacrifice. When a unit on his left was driven back, thus leaving his flank in the air and his company practically surrounded, he fearlessly exposed himself to re-adjust the line, walking up and down within fifty yards of the enemy under a withering fire. He personally removed several wounded men, and was the last to leave the village. Later, he again re-adjusted the line, exposing himself regardless of all danger the whole time, and when the enemy four times counter-attacked he sprang each time upon the parapet, deliberately risking his life, and being eventually mortally wounded, in order to stimulate his command. After the enemy had broken through on his left, he again mounted the parapet, and with a few men – who were inspired by his great example – forced them once more to withdraw, thereby undoubtedly saving the left flank.