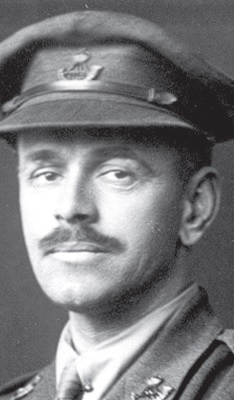 During the Battle of Cambrai, the German counter-attack which had begun on 30 November 1917 forced the British to withdraw from Masnières on 1 December. The British then held a line across the Canal de St Quentin between Marcoing and Masnières. There was heavy fighting here on 3 December in the course of which Captain A M Lascelles distinguished himself. That night the British withdrew to the outskirts of Marcoing, which was itself to be abandoned in the following days as the Germans pushed west.

For most conspicuous bravery, initiative and devotion to duty when in command of his company in a very exposed position. After a very heavy bombardment during which Capt. Lascelles was wounded, the enemy attacked in strong force but was driven off, success being due in a great degree to the fine example set by this officer, who, refusing to allow his wound to be dressed, continued to encourage his men and organise the defence. Shortly afterwards the enemy again attacked and captured the trench, taking several of his men prisoners. Capt. Lascelles at once jumped on to the parapet and followed by the remainder of his company, 12 men only, rushed across under very heavy machine-gun fire and drove over 60 of the enemy back, thereby saving a most critical situation. He was untiring in reorganising the position, but shortly afterwards the enemy again attacked and captured the trench and Capt. Lascelles, who escaped later. The remarkable determination and gallantry of this officer in the course of operations, during which he received two further wounds, afforded an inspiring example to all.