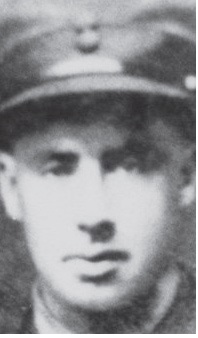 On 6 December 1917, towards the end of the Battle of Cambrai, 9th Battalion The Royal Inniskilling Fusiliers attacked the Germans at the foot of Welsh Ridge north of La Vacquerie, just north of the Péronne-Cambrai road, to try and recapture positions lost the previous day but could not maintain themselves against a German counter-attack.

For repeated acts of most conspicuous bravery. He led his company in an attack and cleared 400 yards of trench. Though wounded, when the enemy attacked in superior numbers he sprang out of the trench with eight men and met the attack in the open, killing many and taking six prisoners. For three hours after this, all other officers having become casualties, he remained with his company, refusing to go to the dressing station, and repeatedly repelled bombing attacks. Later, when the enemy again attacked in superior numbers, he led his men to repel the attack and was mortally wounded. His heroism, when worn out and exhausted from loss of blood, inspired his men to hold out, though almost surrounded, till reinforcements arrived and dislodged the enemy.