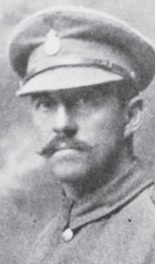 On 21 February 1918 British forces took Jericho. General Sir Edmund Allenby now planned to move north towards Nablus and north-east across the Wadi el ’Auja, which would allow his troops to cross the Jordan and attack the Hejaz railway running south through Amman. On 9 March the British captured Tell ’Asur, the highest ground north of Jerusalem, off the Jerusalem to Nablus road, east of the village of Selwad. Just north of Selwad, across the Wadi el Nimr rose the hill of Burj-el-Lisaneh. On 10 March 10th Battalion The King’s Shropshire Light Infantry and 24th Battalion The Welsh Regiment climbed and captured the Lisaneh Ridge. It was during the first of three Turkish counter-attacks that Private H E Whitfield distinguished himself. The gun Whitfield captured had been lost by his regiment during the withdrawal north of Jaffa on 30 November 1917.

For most conspicuous bravery, initiative, and absolute disregard of personal safety. During the first and heaviest of three counter-attacks made by the enemy on the position which had just been captured by his battalion, Pte. Whitfield, single-handed, charged and captured a Lewis gun which was harassing his company at short range. He bayonetted or shot the whole gun team, and, turning the gun on the enemy, drove them back with heavy casualties, thereby completely restoring the whole situation in his part of the line. Later, he organised and led a bombing attack on the enemy who had established themselves in an advanced position close to our line, and from which they were enfilading his company. He drove the enemy back with great loss, and by establishing his party in their position, saved many lives, and materially assisted in the defeat of the counter-attack.