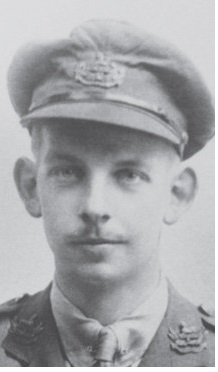 For most conspicuous bravery and devotion to duty in attack. Capt. James led his company forward with magnificent determination and courage, inflicting severe losses on the enemy and capturing twenty-seven prisoners and two machine guns. He was wounded, but refused to leave his company, and repulsed three hostile onslaughts the next day. Two days later, although the enemy had broken through on his right flank, he refused to withdraw and made a most determined stand, inflicting very heavy losses on the enemy and gaining valuable time for the withdrawal of guns. He was ordered by the senior officer on the spot to hold on “to the last” in order to enable the brigade to be extricated. He then led his company forward in a local counter-attack on his own initiative, and was again wounded. He was last seen working a machine gun single-handed, after having been wounded a third time. No praise can be too high for the gallant stand made by this company, and Capt. James, by his dauntless courage and magnificent example, undoubtedly enabled the battalion to be withdrawn before being completely cut off.