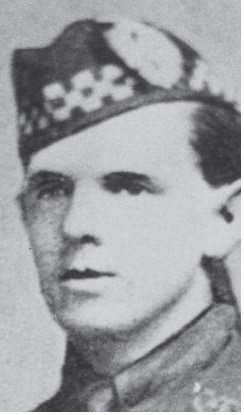 For most conspicuous bravery and devotion to duty. When fighting with his platoon in the forward position of the battle zone, 2nd Lt. Buchan, although wounded early in the day, insisted on remaining with his men, and continually visited all his posts, encouraging and cheering his men in spite of most severe shell fire, from which his platoon was suffering heavy casualties. Later, when the enemy were creeping closer, and heavy machine-gun fire was raking his position, 2nd Lt. Buchan, with utter disregard of his personal safety, continued to visit his posts, and though still further injured accidentally, he continued to encourage his men and visit his posts. Eventually, when he saw the enemy had practically surrounded his command, he collected his platoon and prepared to fight his way back to the supporting line. At this point the enemy, who had crept round his right flank, rushed towards him, shouting out “Surrender.” “To hell with surrender,” he replied, and shooting the foremost of the enemy, he finally repelled this advance with his platoon. He then fought his way back to the supporting line of the forward position, where he held out till dusk. At dusk he fell back as ordered, but in spite of his injuries again refused to go to the aid post, saying his place was beside his men. Owing to the unexpected withdrawal of troops on the left flank it was impossible to send orders to 2nd Lt. Buchan to withdraw, as he was already cut off, and he was last seen holding out against overwhelming odds. The gallantry, self-sacrifice, and utter disregard of personal safety displayed by this officer during these two days of most severe fighting is in keeping with the highest traditions of the British Army.