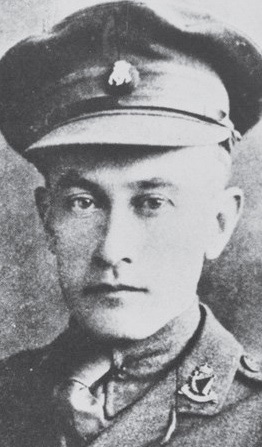 For most conspicuous bravery and self-sacrifice on the 21st March, 1918, at the Race Course Redoubt, near Grougie. For seven hours he held this most important post, and though twice wounded and practically single-handed, he maintained his position until another section could be got to his help. On two occasions, with two N.C.O.’s only, he got out on top under heavy machine-gun and rifle fire, and cleared the enemy out of the trench, killing many. He continued to repel attack after attack until he was mortally wounded and collapsed. His valour, self-sacrifice and example were of the highest order.