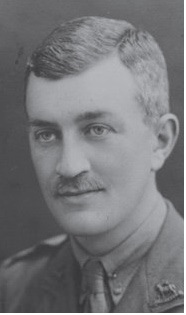 On 23 March 1918, two days after the German Spring offensive had begun, the French mounted a counter-attack in an attempt to regain the western bank of the Crozat Canal, which connected the Somme and the Oise, south-west of St Quentin. Two battalions attacked Tergnier, at the southern end of the canal, and two more the high ground slightly to the north, supported by two companies of 7th Battalion The Queen’s Royal West Surrey Regiment. The French commander of this latter force was soon hit and overall command was assumed by Temporary Lieutenant Colonel C Bushell. With great gallantry he spurred on the Allied troops, though himself injured, but the Germans could not be dislodged and the Allies were forced to withdraw west through the Bois de Frières.

For most conspicuous bravery and devotion to duty when in command of his battalion. Lt.-Col. Bushell personally led “C” Company of his battalion, who were co-operating with an Allied regiment in a counter-attack, in face of very heavy machine-gun fire. In the course of this attack he was severely wounded in the head, but he continued to carry on, walking about in the front of both English and Allied troops encouraging and re-organising them. He refused even to have his wound attended to until he had placed the whole line in a sound position and formed a defensive flank to meet a turning movement by the enemy. He then went to brigade headquarters and reported the situation, had his wound dressed, and returned to the firing line, which had come back a short distance. He visited every portion of the line, both English and Allied, in the face of terrific machine-gun and rifle fire, exhorting the troops to remain where they were, and to kill the enemy. In spite of his wounds this gallant officer refused to go to the rear and had eventually to be removed to the dressing station in a fainting condition. To the magnificent example of energy, devotion and courage shown by their Commanding Officer is attributed the fine spirit displayed and the keen fight put up by his battalion not only on the day in question but on each succeeding day of the withdrawal.