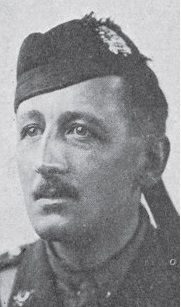 The German offensive pushed rapidly to the west and by 25 March 1918, having captured Bapaume and Péronne, was heading for Albert. The British 35th Division was in the line north of the Somme, west of Péronne. Its sector included the village of Maricourt and on the morning of the 25th the Germans entered the nearby Bois Favières. Lieutenant Colonel W H Anderson, commanding 12th Battalion The Highland Light Infantry, counter-attacked and succeeded in driving them out. He was subsequently killed while trying to clear the Germans from Maricourt Wood and a timber yard outside the village which they had occupied. Though the Germans were slowed down, their advance nevertheless continued and they reached Albert the following day.

For most conspicuous bravery, determination, and gallant leading of his command. The enemy attacked on the right of the battalion frontage, and succeeded in penetrating the wood held by our men. Owing to successive lines of the enemy following on closely there was the gravest danger that the flank of the whole position would be turned. Grasping the seriousness of the situation, Colonel Anderson made his way across the open in full view of the enemy now holding the wood on the right, and after much effort succeeded in gathering the remainder of the two right companies. He personally led the counter-attack and drove the enemy from the wood, capturing twelve machine guns and seventy prisoners, and restoring the original line. His conduct in leading the charge was quite fearless and his most splendid example was the means of rallying and inspiring the men during a most critical hour. Later on the same day, in another position, the enemy had penetrated to within three hundred yards of the village and were holding a timber-yard in force. Colonel Anderson reorganised his men after they had been driven in and brought them forward to a position of readiness for a counter-attack. He led the attack in person and throughout showed the utmost disregard for his own safety. The counter-attack drove the enemy from his position, but resulted in this very gallant officer losing his life. He died fighting within the enemy’s lines, setting a magnificent example to all who were privileged to serve under him.