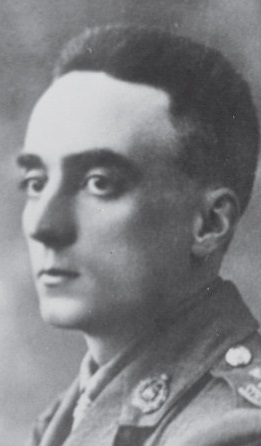 By 30 March 1918, the German advance was beginning to threaten Amiens. The British and French lines met at the outskirts of the Bois de Moreuil, just north-east of Moreuil on the River Avre. The wood was on a ridge that provided a vantage point along the river valley north-west to Amiens. Together with Moreuil itself, it had been evacuated by the French on the 29th and by the morning of the 30th the Germans were beginning to infiltrate. The British and French decided it must be recaptured. The 2nd Cavalry Division was ordered to mount an attack in the course of which Lieutenant G M Flowerdew, Lord Strathcona’s Horse, led a heroic charge against two lines of German machine-guns. The north of the wood was temporarily secured but over the following days the Allied line was pushed back and by 5 April was almost at the River Luce north of Castel.

For most conspicuous bravery and dash when in command of a squadron detailed for special service of a very important nature. On reaching the first objective, Lieutenant Flowerdew saw two lines of the enemy, each about sixty strong, with machine guns in the centre and flanks, one line being about two hundred yards behind the other. Realising the critical nature of the operation and how much depended upon it, Lieutenant Flowerdew ordered a troop under Lieutenant Harvey, V.C., to dismount and carry out a special movement while he led the remaining three troops to the charge. The squadron (less one troop) passed over both lines, killing many of the enemy with the sword; and wheeling about galloped at them again. Although the squadron had then lost about 70 per cent. of its numbers, killed and wounded, from rifle and machine-gun fire directed on it from the front and both flanks, the enemy broke and retired. The survivors of the squadron then established themselves in a position where they were joined, after much hand-to-hand fighting, by Lieutenant Harvey’s party. Lieutenant Flowerdew was dangerously wounded through both thighs during the operation, but continued to cheer on his men. There can he no doubt that this officer’s great valour was the prime factor in the capture of the position.