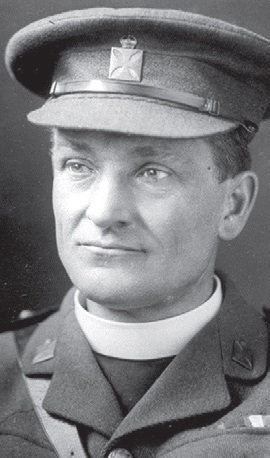 On 5 April 1918, west of Bapaume, 37th Division attempted to recover Rossignol Wood, south of Gommecourt and north of Hébuterne, which had been lost to the Germans on 28 March (see A/Lt Col O C S Watson VC). 8th Battalion The Lincolnshire Regiment and 8th Battalion The Somerset Light Infantry took part in the unsuccessful assault, in which the Reverend Theodore Hardy distinguished himself by his care of the wounded. On 25, 26 and 27 April 1918 he similarly distinguished himself near Bucquoy, a few miles to the east.

For most conspicuous bravery and devotion to duty on many occasions. Although over fifty years of age, he has, by his fearlessness, devotion to men of his battalion, and quiet, unobtrusive manner, won the respect and admiration of the whole division. His marvellous energy and endurance would be remarkable even in a very much younger man, and his valour and devotion are exemplified in the following incidents:- An infantry patrol had gone out to attack a previously located enemy post in the ruins of a village, the Reverend Theodore Bayley Hardy (C.F.) being then at company headquarters. Hearing firing, he followed the patrol, and about four hundred yards beyond our front line of posts found an officer of the patrol dangerously wounded. He remained with the officer until he was able to get assistance to bring him in. During this time there was a great deal of firing, and an enemy patrol actually penetrated between the spot at which the officer was lying and our front line and captured three of our men. On a second occasion, when an enemy shell exploded in the middle of one of our posts, the Reverend T.B. Hardy at once made his way to the spot, despite shell and trench mortar fire which were going on at the time, and set to work to extricate the buried men. He succeeded in getting out one man who had been completely buried. He then set to work to extricate a second man, who was found to be dead. During the whole of the time that he was digging out the men this chaplain was in great danger, not only from shell fire, but also because of the dangerous condition of the wall of the building which had been hit by the shell which buried the men. On a third occasion he displayed the greatest devotion to duty when our infantry, after a successful attack, were gradually forced back to their starting trench. After it was believed that all our men had withdrawn from the wood, Chaplain Hardy came out of it, and on reaching an advanced post asked the men to help him to get in a wounded man. Accompanied by a serjeant, he made his way to the spot where the man lay, within ten yards of a pill-box which had been captured in the morning, but was subsequently recaptured and occupied by the enemy. The wounded man was too weak to stand, but between them the chaplain and the serjeant eventually succeeded in getting him to our lines. Throughout the day the enemy’s artillery, machine-gun, and trench mortar fire was continuous, and caused many casualties. Notwithstanding, this very gallant chaplain was seen moving quietly amongst the men and tending the wounded, absolutely regardless of his personal safety.