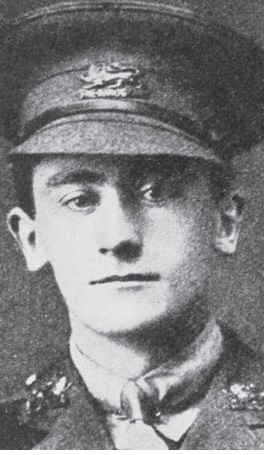 For most conspicuous bravery, devotion to duty and self-sacrifice in action. After offering a long and gallant resistance against heavy odds in the Keep held by his platoon, this officer, with only five of his men remaining, slowly withdrew in the face of superior numbers, contesting every inch of the ground. The enemy were pressing him hard with bombs and machine-gun fire from close range. Single-handed 2nd Lt. Collin attacked the machine gun team. After firing his revolver into the enemy, he seized a Mills grenade and threw it into the hostile team, putting the gun out of action, killing four of the team and wounding two others. Observing a second hostile machine gun firing, he took a Lewis gun, and selecting a high point of vantage on the parapet whence he could engage the gun, he, unaided, kept the enemy at bay until he fell mortally wounded. The heroic self-sacrifice of 2nd Lt. Collin was a magnificent example to all.