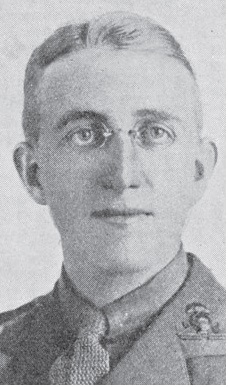 For most conspicuous bravery and devotion to duty in operations. 2nd Lt. Schofield led a party of nine men against a strong point which was reported strongly held by the enemy, and was attacked by about 100 of the enemy with bombs. He disposed his men so skilfully, and made such good use of rifle and Lewis gun fire, that the enemy took cover in dug-outs. This officer himself then held up and captured a party of twenty. With the help of other parties this position was then cleared of the enemy, who were all killed or captured. He then collected the remainder of his men, made his party up to ten, and proceeded towards the front line, previously informing his Commanding Officer as to the position, and that he was proceeding to retake the front line. He met large numbers of the enemy in a communication trench in front of him and in a drain on his right and left. His party opened rapid rifle fire, and he climbed out on to the parapet under point blank machine-gun fire, and, by his fearless demeanour and bravery, forced the enemy to surrender. As a result 123 of the enemy, including several officers, were captured by 2nd Lt. Schofield and his party. This very gallant officer was killed a few minutes later.