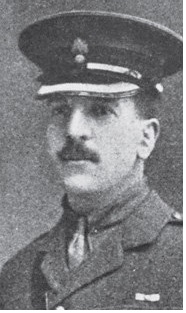 As the German advance in the Laventie salient continued, 4th Guards Brigade was in the line around Vieux Berquin (see also 11-12 April 1918 above), south-east of Hazebrouck. At Vieux Berquin on 12 and 13 April 1918 there was heavy fighting. The stand made by battalions of the Grenadier, Coldstream and Irish Guards, together with the King’s Own Yorkshire Light Infantry prevented the Germans breaking through the line but at terrible cost and on the evening of 13 April the line was pulled back west of Vieux Berquin, which was occupied by the Germans.

For most conspicuous bravery, devotion to duty, and self-sacrifice when in command of a flank on the left of the Grenadier Guards. Having been ordered to attack a village, he personally led forward two platoons, working from house to house, killing some thirty of the enemy, seven of whom he killed himself. The next day he was occupying a position with some thirty to forty men, the remainder of his company having become casualties. As early at 8.15 a.m. his left flank was surrounded and the enemy was enfilading him. He was attacked no less than four times during the day, and each time beat off the hostile attack, killing many of the enemy. Meanwhile, the enemy brought up three field guns to within 300 yards of his line, and were firing over open sights and knocking his trench in. At 6.15 p.m. the enemy had worked to within sixty yards of his trench. He then called on his men, telling them to cheer and charge the enemy and fight to the last. Led by Captain Pryce, they left their trench and drove back the enemy, with the bayonet, some 100 yards. Half an hour later the enemy had again approached in stronger force. By this time Captain Pryce had only 17 men left, and every round of his ammunition had been fired. Determined that there should be no surrender, he once again led his men in a bayonet charge, and was last seen engaged in a fierce hand-to-hand struggle with overwhelming numbers of the enemy. With some forty men he had held back at least one enemy battalion for over ten hours. His company undoubtedly stopped the advance through the British line, and thus had great influence on the battle.