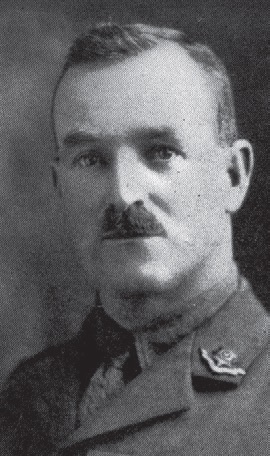 On 13 April 1918 the Germans attacked the village of Neuve Église (Nieuwkerke), which lay just within Belgium, south of Mount Kemmel, on the Messines to Bailleul road, an area where the British salient east of Ypres swung round south-west to meet the rapidly extending German salient west of Laventie and Estaires. On the 14th the enemy once again entered the village and by 11am the Mairie, where Lieutenant Colonel G F L Stoney, 2nd Battalion The Worcestershire Regiment, had his HQ, was cut off. Second Lieutenant J J Crowe led a number of desperate sorties from the Mairie to capture German machine-guns which covered the exits from the village. This enabled Stoney and his garrison to leave the Mairie and withdraw north-west to Danouter. Colonel Stoney was awarded the DSO for his part in the action.

For most conspicuous bravery, determination, and skilful leading when the enemy, for the third time having attacked a post in a village, broke past on to the high ground and established a machine gun and snipers in the broken ground at the back of the village. 2nd Lt. Crowe twice went forward with two N.C.Os. and seven men to engage the enemy, both times in face of active machine-gun fire and sniping. His action was so daring that on each occasion the enemy withdrew from the high ground into the village, where 2nd Lt. Crowe followed them and himself opened fire upon the enemy as they collected in the doorways of houses. On the second occasion, taking with him only two men of his party, he attacked two enemy machine guns which were sweeping the post, killed both the gunners with his rifle, and prevented any others from reaching the guns and bringing them in action again. He then turned upon a party of the enemy who were lined up in front of him, killed several, and the remainder withdrew at once. He captured both the guns, one of which was the battalion Lewis gun which had been captured by the enemy on the previous day. Throughout the seven days of operations 2nd Lt. Crowe showed an utter disregard of danger and was recklessly brave. His personal example and cheerfulness contributed largely to the determination of the garrison of the post to hold out. It may safely be said that but for his coolness and skill at the last moment, when he personally placed the covering party in close proximity to the enemy, who were again closing round, and were also forming up in fours near by, the garrison of the post could never have effected its escape. The valour and zeal displayed by 2nd Lt. Crowe were of the highest order.