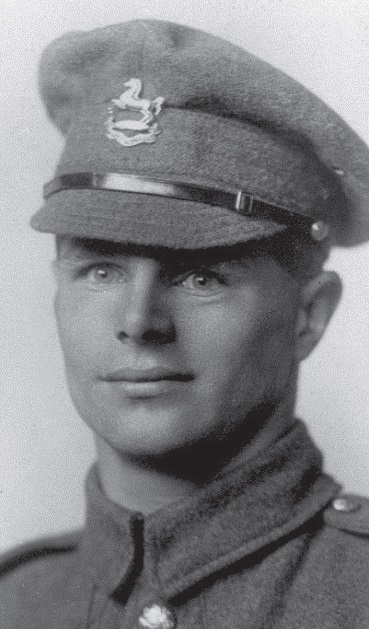 1st Battalion The King’s (Liverpool) Regiment was in the line near Boyelles, south of Arras on the Bapaume road. On 16 April 1918 their positions were subject to a series of German attacks by way of a sunken road from Boisleux St Marc, slightly to the north, which threatened to overrun their trenches. Battalion Headquarters was in desperate need of accurate details of progress made by the Germans. After many men had been killed trying to secure these, Private J T Counter volunteered to go out and succeeded in bringing back the vital information.

For most conspicuous gallantry and devotion to duty. It was necessary for information to be obtained from the front line, in which the enemy had effected a lodgment. The only way was from the support line along a sunken road, and thence down a forward slope for about 250 yards with no cover, in full view of the enemy, and swept by their machine-gun and rifle fire. After a small party had tried unsuccessfully (the leader having been killed and another wounded before leaving the sunken road) it was thought that a single man had more chance of getting through. This was attempted five times, but on each occasion the runner was killed in full view of the position from which he had started. Private Counter, who was near his officer at the time, and had seen the five runners killed one after the other, then volunteered to carry the message. He went out under terrific fire and succeeded in getting through. He then returned, carrying with him the vital information with regard to the estimated number of enemy in our line, the exact position of our flank, and the remaining strength of our troops. This information enabled his commanding officer to organise and launch the final counter-attack, which succeeded in regaining the whole of our position. Subsequently this man carried back five messages across the open under the heavy artillery barrage to company headquarters. Private Counter’s extraordinary courage in facing almost certain death because he knew that it was vital that the message should be carried produced a most excellent impression on his young and untried companions.