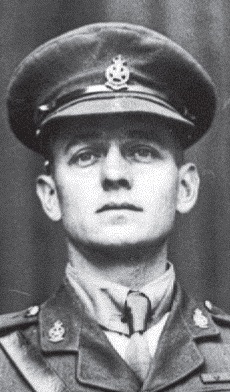 Gavrelle lies north of Roeux on the road east from Arras to Douai.

For most conspicuous bravery and devotion to duty during a raid on the enemy’s trenches. Lt. McKean’s party, which was operating on the right flank, was held up at a block in the communication trench by most intense fire from hand grenades and machine guns. This block, which was too close to our trenches to have been engaged by the preliminary bombardment, was well protected by wire and covered by a well protected machine gun 30 yards behind it. Realising that if this block were not destroyed, the success of the whole operation might be marred, he ran into the open to the right flank of the block, and with utter disregard of danger, leaped over the block head first on top of the enemy. Whilst lying on the ground on top of one of the enemy, another rushed at him with fixed bayonet; Lt. McKean shot him through the body and then shot the enemy underneath him, who was struggling violently. This very gallant action enabled this position to be captured. Lt. McKean’s supply of bombs ran out at this time, and he sent back to our front line for a fresh supply. Whilst waiting for them he engaged the enemy single-handed. When the bombs arrived, he fearlessly rushed the second block, killing two of the enemy, captured four others and drove the remaining garrison, including a hostile machine-gun section, into a dug-out. The dug-out, with its occupants and machine-gun, was destroyed. This officer’s splendid bravery and dash undoubtedly saved many lives, for had not this position been captured, the whole of the raiding party would have been exposed to dangerous enfilading fire during the withdrawal. His leadership at all times has been beyond praise.