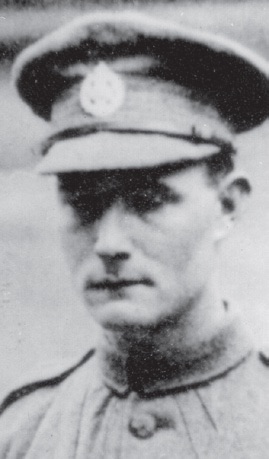 Bucquoy, between Ablainzevelle and Gommecourt, north-west of Bapaume, had been the scene of VC Actions on 25-31 March and 25-27 April 1918 (qv). On 8 May 1918 two companies of 13th Battalion The Rifle Brigade (Prince Consort’s Own) attacked enemy positions there.

For most conspicuous bravery. The enemy’s outpost position was attacked by two companies of his unit without artillery preparation. Pte. Beesley was in the leading wave of the left company, which came under heavy fire as it approached the enemy’s front line. His platoon serjeant and all the section commanders were killed. This young soldier, realising the situation at once, took command and led the assault. Single-handed he rushed a post, and with his revolver killed two of the enemy at a machine gun. He then shot dead an officer who ran across from a dug-out to take their place at the machine gun. Three more officers appeared from the dug-out. These he called on to surrender; seeing one of them trying to get rid of a map he shot him and obtained the map. He took four more prisoners from a dug-out and two others from a shelter close by, disarmed them and sent them back to our lines. At this moment his Lewis gun was brought up by a comrade who was acting as a carrier. Pte. Beesley at once brought it into action, and used it with great effect against the enemy as they bolted towards their support line, inflicting many casualties. For four hours Pte. Beesley and his comrade held on to the position under very heavy machine-gun and rifle fire. The enemy then advanced to counter-attack, and the other soldier was wounded. Pte. Beesley carried on by himself, and actually maintained his position until 10 p.m., long after the posts on his right and left had been practically wiped out and the survivors had fallen back. It was mainly due to his action that the enemy were prevented from rushing the position, and that the remnants of his company, when compelled to withdraw, were able to do so without further loss. When darkness set in Pte. Beesley made his way back to the original line from which the attack had started, bringing with him the wounded carrier and the Lewis gun. He at once mounted the Lewis gun in the trench and remained in action until things quietened down. The indomitable pluck, skilful shooting, and good judgment in economising ammunition displayed by Pte. Beesley stamp the incident as one of the most brilliant actions in recent operations.