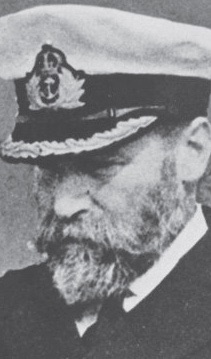 This officer was in “Brilliant” in the unsuccessful attempt to block Ostend on the night of 22nd/23rd April, and at once volunteered for a further effort. He acted as 1st Lieut. of “Vindictive,” and worked with untiring energy fitting out that ship for further service. On the night of 9th/10th May, after his commanding officer had been killed and the second in command severely wounded, Lieut. Crutchley took command of “Vindictive” and did his utmost by manoeuvring the engines to place that ship in an effective position. He displayed great bravery both in the “Vindictive” and in M.L. 254, which rescued the crew after the charges had been blown and the former vessel sunk between the piers of Ostend harbour, and did not himself leave the “Vindictive” until he had made a thorough search with an electric torch for survivors under a very heavy fire. Lieut. Crutchley took command of M.L. 254 when the commanding officer sank exhausted from his wounds, the second in command having been killed. The vessel was full of wounded and very seriously damaged by shell fire, the fore part being flooded. With indomitable energy and by dint of baling with buckets and shifting weight aft, Lieut. Crutchley and the unwounded kept her afloat, but the leaks could not be kept under, and she was in a sinking condition, with her forecastle nearly awash when picked up by H.M.S. “Warwick.” The bearing of this very gallant officer and fine seaman throughout these operations off the Belgian coast was altogether admirable and an inspiring example to all thrown in contact with him.