The Citation omits the ‘e’ from Brookes’ surname. 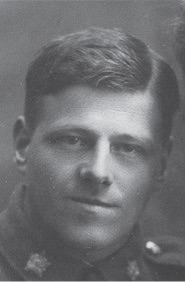 On 30 June 1918 a British airman was overcome by toxic fumes while investigating a German bomb crater at Belloy-sur-Somme, north-west of Amiens. Though the airman was rescued, all four men who went to his assistance, and who were subsequently awarded the Albert Medal, were affected by the fumes and two died. Of the two survivors only Sergeant V Brookes, Canadian Cavalry Field Ambulance, lived long enough for his Medal to be converted to the George Cross.

The KING has been pleased to award the Albert Medal to Lieutenant-Colonel (Temporary Brigadier-General) Alfred Burt, D.S.O., and Sergeant Victor Brooks, Canadian Cavalry Field Ambulance; and (posthumous awards) to Private Arthur Johnson and Driver Alfred Horn, late of the Army Service Corps, in recognition of their gallantry in saving or endeavouring to save life in France in June last. The circumstances are as follows:— On the 30th June, 1918, a Corporal of the Royal Air Force, who had been lowered by a rope into a crater caused by a bomb which had been dropped by a hostile aeroplane, was overcome by carbon monoxide gas, which had accumulated in large quantities in the crater. Endeavours were made to haul him out, but his head became caught, and Private Johnson volunteered to descend and re-adjust the rope, which he did successfully, and the Corporal was rescued, but Johnson was himself overcome. Driver Horn at once put on his respirator and lowered himself to the rescue, but was likewise overcome. Sergeant Brooks then volunteered to attempt to rescue both men, but was also overcome by the gas; fortunately he was hauled out. At this stage Brigadier-General Burt refused to permit anyone else to descend, but did so himself, and succeeded in dragging one of the unconscious men some way towards the rope; he, however, became unconscious and had to be pulled out. There can be no doubt that all knew the risk that they were running, and willingly incurred it in the hope of saving life.