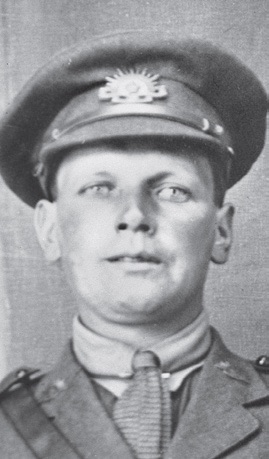 For most conspicuous bravery and dash in attack, when, on reaching the wire in front of an enemy trench, strong opposition was encountered. The advance was at once checked, the enemy being in force about forty yards beyond the wire, and commanding the gap with machine guns and rifles. Lt. Gaby found another gap in the wire, and, single-handed, approached the strong point while machine guns and rifles were still being fired from it. Running along the parapet, still alone, and at point-blank range, he emptied his revolver into the garrison, drove the crews from their guns, and compelled the surrender of fifty of the enemy with four machine guns. He then quickly reorganised his men and led them on to his final objective, which he captured and consolidated. Three days later, during an attack, this officer again led his company with great dash to the objective. The enemy brought heavy rifle and machine-gun fire to bear upon the line, but in the face of this heavy fire Lt. Gaby walked along his line of posts, encouraging his men to quickly consolidate. While engaged on this duty he was killed by an enemy sniper.