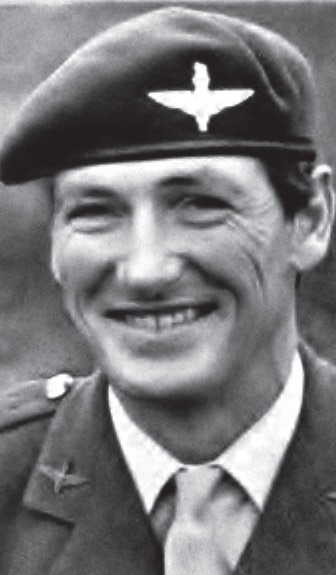 On 2 April 1982 Argentina invaded and occupied the Falkland Islands. A Naval task force was despatched by Britain to expel the Argentinians and on 21 May British troops landed at San Carlos Bay in the north-west of the East Island at the entrance to Falkland Sound. On 28 May, having advanced under cover of dark, 2 Para, commanded by Lieutenant Colonel H Jones, attacked the narrow isthmus to the south-east that connected the northern and southern parts of the East Island. While B and D Companies made their way along the western side of the isthmus, A Company, under Major Dair Farrar-Hockley was allotted the eastern side. Between Boca House on the west and Darwin on the east, the isthmus was bisected by the low ridge of Darwin Hill. A Company was held up by the Argentinian positions along this ridge. Colonel Jones who had come up to see the position for himself charged forward and was mortally wounded. The tide of battle now turned and after the Argentinian command trench was destroyed the enemy on the ridge began to surrender. Darwin and, beyond it, Goose Green were liberated and the Argentinians there surrendered. The battle had cost 2 Para 16 dead and 35 wounded but the victory boosted the morale of British forces in the field and strengthened the political resolve of the government at home. Major Farrar- Hockley was awarded the MC for his bravery during the attack.

On 28th May 1982 Lieutenant Colonel Jones was commanding 2nd Battalion The Parachute Regiment on operations on the Falkland Islands. The Battalion was ordered to attack enemy positions in and around the settlements of Darwin and Goose Green. During the attack against an enemy who was well dug in with mutually supporting positions sited in depth, the Battalion was held up just South of Darwin by a particularly well-prepared and resilient enemy position of at least eleven trenches on an important ridge. A number of casualties were received. In order to read the battle fully and to ensure that the momentum of his attack was not lost, Colonel Jones took forward his reconnaissance party to the foot of a re-entrant which a section of his Battalion had just secured. Despite persistent, heavy and accurate fire the reconnaissance party gained the top of the re-entrant, at approximately the same height as the enemy positions. From here Colonel Jones encouraged the direction of his Battalion mortar fire, in an effort to neutralise the enemy positions. However, these had been well prepared and continued to pour effective fire onto the Battalion advance, which, by now held up for over an hour and under increasingly heavy artillery fire, was in danger of faltering. In his effort to gain a good viewpoint, Colonel Jones was now at the very front of his Battalion. It was clear to him that desperate measures were needed in order to overcome the enemy position and rekindle the attack, and that unless these measures were taken promptly the Battalion would sustain increasing casualties and the attack perhaps even fail. It was time for personal leadership and action. Colonel Jones immediately seized a sub-machine gun, and, calling on those around him and with total disregard for his own safety, charged the nearest enemy position. This action exposed him to fire from a number of trenches. As he charged up a short slope at the enemy position he was seen to fall and roll backward downhill. He immediately picked himself up, and again charged the enemy trench, firing his sub-machine gun and seemingly oblivious to the intense fire directed at him. He was hit by fire from another trench which he outflanked, and fell dying only a few feet from the enemy he had assaulted. A short time later a company of the Battalion attacked the enemy, who quickly surrendered. The devastating display of courage by Colonel Jones had completely undermined their will to fight further. Thereafter the momentum of the attack was rapidly regained, Darwin and Goose Green were liberated, and the Battalion released the local inhabitants unharmed and forced the surrender of some 1,200 of the enemy. The achievements of 2nd Battalion The Parachute Regiment at Darwin and Goose Green set the tone for the subsequent land victory on the Falklands. They achieved such a moral superiority over the enemy in this first battle that, despite the advantages of numbers and selection of battle-ground, they never thereafter doubted either the superior fighting qualities of the British troops, or their own inevitable defeat. This was an action of the utmost gallantry by a Commanding Officer whose dashing leadership and courage throughout the battle were an inspiration to all about him.