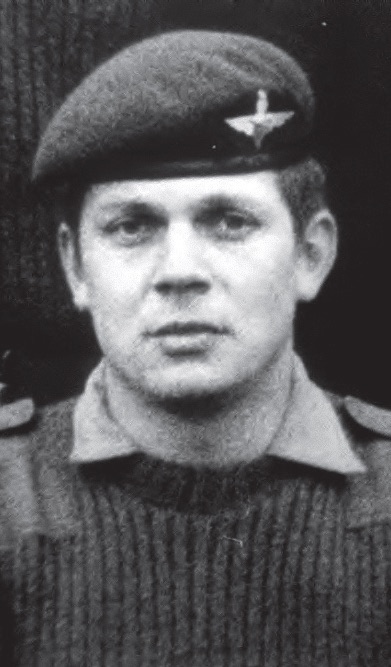 By 11 June 1982 British forces had reached the outskirts of Port Stanley, the capital of the Falklands, on the north-east coast of East Island. This was surrounded by a ring of high ground which had been fortified by the Argentinians. Mount Longdon was to the west of Stanley and was defended by B Company of the Argentinian 7th Regiment under Major Carlos Salvadores. On the night of 11-12 June, 3 Para attacked Mount Longdon. The battle lasted ten hours. Out of 118 men, 3 Para lost 20 dead and over 40 wounded. Over 50 Argentinians were killed and between 150 and 200 wounded. On 14 June Port Stanley was liberated and the Argentinian forces on the Falkland Islands surrendered.

During the night of 11th/12th June 1982, 3rd Battalion The Parachute Regiment mounted a silent night attack on an enemy battalion position on Mount Longdon, an important objective in the battle for Port Stanley in the Falkland Islands. Sergeant McKay was platoon sergeant of 4 Platoon, B Company, which, after the initial objective had been secured, was ordered to clear the Northern side of the long East/West ridge feature, held by the enemy in depth, with strong mutually-supporting positions. By now the enemy were fully alert, and resisting fiercely. As 4 Platoon’s advance continued it came under increasingly heavy fire from a number of wellsited enemy machine gun positions on the ridge, and received casualties. Realising that no further advance was possible the Platoon Commander ordered the Platoon to move from its exposed position to seek shelter among the rocks of the ridge itself. Here it met up with part of 5 Platoon. The enemy fire was still both heavy and accurate, and the position of the platoons was becoming increasingly hazardous. Taking Sergeant McKay, a Corporal and a few others, and covered by supporting machine gun fire, the Platoon Commander moved forward to reconnoitre the enemy positions but was hit by a bullet in the leg, and command devolved upon Sergeant McKay. It was clear that instant action was needed if the advance was not to falter and increasing casualties to ensue. Sergeant McKay decided to convert this reconnaissance into an attack in order to eliminate the enemy positions. He was in no doubt of the strength and deployment of the enemy as he undertook this attack. He issued orders, and taking three men with him, broke cover and charged the enemy position. The assault was met by a hail of fire. The Corporal was seriously wounded, a Private killed and another wounded. Despite these losses Sergeant McKay, with complete disregard for his own safety, continued to charge the enemy position alone. On reaching it he despatched the enemy with grenades, thereby relieving the position of beleagured 4 and 5 Platoons, who were now able to redeploy with relative safety. Sergeant McKay, however, was killed at the moment of victory, his body falling on to the bunker. Without doubt Sergeant McKay’s action retrieved a most dangerous situation and was instrumental in ensuring the success of the attack. His was a coolly calculated act, the dangers of which must have been too apparent to him beforehand. Undeterred he performed with outstanding selflessness, perseverance and courage. With a complete disregard for his own safety, he displayed courage and leadership of the highest order, and was an inspiration to all those around him.