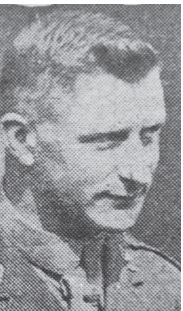 In the Battle of Albert, which began on 21 August 1918 (see above), Drake Battalion, 63rd Royal Naval Division, was involved in the fighting for Longeast Wood between Ablainzeville and Achiet-le-Grand, north-west of Bapaume. The next day the Germans counter-attacked but by the 23rd had been pushed back. By the 25th the Royal Naval Division was assisting the New Zealand Division in attacking Grévillers, just west of Bapaume and on the 29th Bapaume itself fell to the British. On 2 September the British attacked a line to the east of Arras, stretching from Drocourt, just south-east of Lens, in the north, to Quéant, north-east of Bapaume and west of Cambrai, in the south. Drake Battalion took part in the fighting at Pronville, south-east of Quéant. Temporary Commander D M W Beak was awarded the VC for his gallantry during this prolonged period. Chief Petty Officer G Prowse was also awarded a VC for his gallantry at Pronville (see 2 September 1918 below).

For most conspicuous bravery, courageous leadership and devotion to duty during a prolonged period of operations. He led his men in attack, and, despite heavy machine-gun fire, four enemy positions were captured. His skilful and fearless leadership resulted in the complete success of this operation and enabled other battalions to reach their objectives. Four days later, though dazed by a shell fragment, in the absence of the brigade commander, he reorganised the whole brigade under extremely heavy gun fire and led his men with splendid courage to their objective. An attack having been held up he rushed forward, accompanied by only one runner, and succeeded in breaking up a nest of machine guns, personally bringing back nine or ten prisoners. His fearless example instilled courage and confidence in his men, who then quickly resumed the advance under his leadership. On a subsequent occasion he displayed great courage and powers of leadership in attack, and his initiative, coupled with the confidence with which he inspired all ranks, not only enabled his own and a neighbouring unit to advance, but contributed very materially to the success of the Naval Division in these operations.