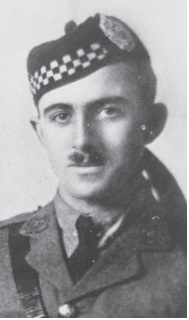 On 24 August 1918, 52nd Division captured Hénin-sur-Cojeul between Arras and Bapaume as part of the advance against the latter town and on the 27th took Fontaine-lès-Croisilles, several miles further east.

For most conspicuous bravery in attack when, acting as Adjutant of his battalion, he was constantly in evidence in the firing line, and by his coolness under most heavy shell and machine-gun fire inspired the confidence of all ranks. Three days later he was in command of the firing line during an attack, and showed throughout most courageous and skilful leading in face of heavy machine-gun fire. When barbed wire was encountered, he personally reconnoitred it before leading his men forward. On one occasion, when extra strong entanglements were reached, he organised and took forward a party of men and under heavy machine-gun fire supervised the making of gaps. Later, when the greater part of our line was definitely held up, Lt. MacIntyre rallied a small party, pushed forward through the enemy barrage in pursuit of an enemy machine-gun detachment, and ran them to earth in a “pill-box” a short distance ahead, killing three and capturing an officer, ten other ranks and five machine guns. In this redoubt he and his party raided three “pill-boxes” and disposed of the occupants, thus enabling the battalion to capture the redoubt. When the battalion was ordered to take up a defensive position, Lt. MacIntyre, after he had been relieved of command of the firing line, reconnoitred the right flank which was exposed. When doing this an enemy machine gun opened fire close to him. Without any hesitation he rushed it single-handed, put the team to flight and brought in the gun. On returning to the redoubt he continued to show splendid spirit while supervising consolidation. The success of the advance was largely due to Lt. MacIntyre’s fine leadership and initiative, and his gallantry and leading was an inspiring example to all.