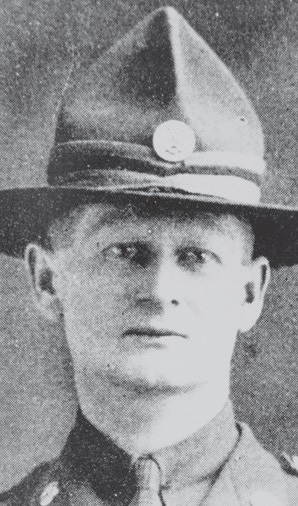 On 26 August 1918, the British advance against Bapaume continued, though the town itself was not to fall until the 29th. An objective of 1st Brigade, New Zealand Division, was Thilloy, just south-west of the town. However, the Germans had reinforced their positions and hung on grimly. Further south, four battalions of The Royal Welsh Fusiliers advanced against Longueval, south-east of Martinpuich, partly in order to drive the enemy out of High Wood, which lay between the two villages. Though they met heavy resistance, the 14th Battalion succeeded in pushing the Germans out of Bazentin-le-Grand and began to advance along the Longueval road after them before being forced to withdraw to a position 500 yards east of Bazentin-le-Grand.

For most conspicuous bravery and devotion to duty when, in an attack on enemy positions, he led a small bombing party under heavy fire and captured an enemy machine-gun. He then proceeded up the sap alone, bombing three machine-gun crews before him. Jumping out of the trench he ran ahead of the enemy. Then, standing on the parapet, he ordered the party, consisting of two officers and about ten men, to surrender. They instantly fired on him, but he threw a bomb and jumped down amongst them, killed two, put the rest to flight, and so captured two machine guns. This prompt and gallant action not only saved many lives, but also enabled the advance to be continued unopposed.