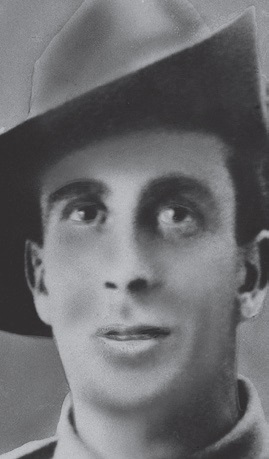 Meanwhile, to the south, Fourth Army was moving forward south-east of Albert and 3rd Australian Division was north of the River Somme. When on the 26 and 27 August 1918 the Allies advanced through Maricourt, 41st Battalion (Queensland) attacked Fargny Wood and Mill, north of the great horseshoe bend of the river to the west of Curlu.

For most conspicuous bravery and devotion to duty on the 26/27th August, 1918, east of Bray. He led his section through heavy shell fire to the objective, which he consolidated. Singlehanded he attacked an enemy machine gun which was enfilading the company on his right, killed the man on the gun, and captured the post, which contained one officer and ten men. He then cleared up a trench, capturing twenty-nine prisoners and two machine guns. In clearing up further trenches he captured twenty-two prisoners, including one officer, and three machine guns. Practically unaided, he captured, in the course of these operations, two officers and sixtyone other ranks, together with six machine guns, and displayed throughout a wonderful example of fearless initiative.