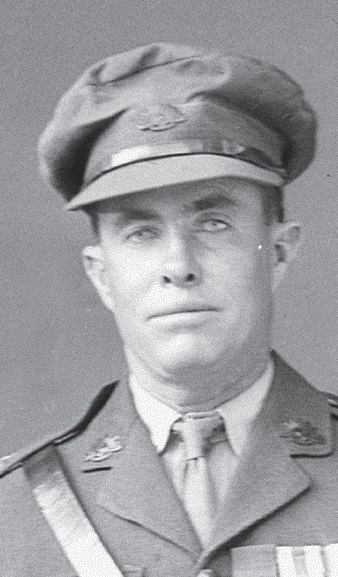 For most conspicuous bravery, initiative and devotion to duty on 1st September, 1918, in the attack on Mont St. Quentin, near Peronne, when in charge of four Vickers guns. During the early stages of the advance he located and captured, single-handed, an enemy machine-gun which was causing casualties, and by turning it on the enemy inflicted severe losses. Subsequently, by the skilful, tactical handling of his guns, he cut off and captured twentyfive of the enemy. Later, by fearless reconnaissance under heavy fire, and by the energy, foresight and promptitude with which he brought fire to bear on various enemy groups, he gave valuable support to the infantry advance. Again, when short of ammunition, he secured an enemy machine-gun, which he mounted and fired in full view of the enemy, causing the enemy to retire further, and enabling our infantry to advance. Under intense fire, although wounded, he maintained the fire of this gun at a very critical period. During the following night he steadied and gave valuable support to a small detached post, and by his coolness and cheerfulness inspirited the men in a great degree. Throughout the night he kept close watch by personal reconnaissance on the enemy movements, and was evacuated exhausted thirty hours after being wounded. The valour and resourcefulness of Lt. Towner undoubtedly saved a very critical situation, and contributed largely to the success of the attack.