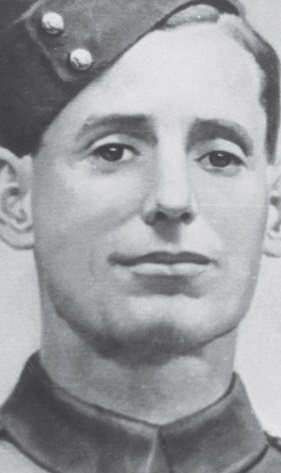 For most conspicuous bravery and initiative when with a daylight patrol sent out to reconnoitre and to gain touch with a neighbouring division. When on the west bank of a river an enemy machine-gun post was sighted on the east bank. The river being too deep to ford, Sjt. Simpson volunteered to swim across, and having done so crept up alone in rear of the machine-gun post. He shot the sentry and also a second enemy who ran out; he then turned out and caused four more enemy to surrender. A crossing over the river was subsequently found, and the officer and one man of his patrol joined him, and reconnaissance was continued along the river bank. After proceeding some distance machine-gun and rifle fire was opened on the patrol and the officer was wounded. In spite of the fact that no cover was available, Sjt. Simpson succeeded in covering the withdrawal of the wounded officer under most dangerous and difficult conditions and under heavy fire. The success of the patrol, which cleared up a machine-gun post on the flank of the attacking troops of a neighbouring division and obtained an identification, was greatly due to the very gallant conduct of Sjt. Simpson. Corrections. The notification of the award of the Victoria Cross to No. 41788 Cpl. (L./Sjt.) Walter Simpson, 6th Bn., Linc. Regt., as announced in the London Gazette dated 3rd October, 1918, should be read as awarded to No. 41788 Cpl. (L./Sjt.) Arthur Evans, 6th Bn., Linc. Regt., the latter being the correct Christian and Surname of this N.C.O., which he has been permitted to re-assume.