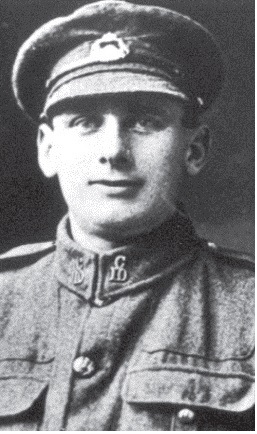 For most conspicuous bravery, initiative, and devotion to duty when, after an unsuccessful attack, Sjt. Knight led a bombing section forward, under very heavy fire of all descriptions, and engaged the enemy at close quarters. Seeing that his party continued to he held up, he dashed forward alone, bayoneting several of the enemy machine-gunners and trench mortar crews, and forcing the remainder to retire in confusion. He then brought forward a Lewis gun and directed his fire on the retreating enemy, inflicting many casualties. In the subsequent advance of his platoon in pursuit, Sjt. Knight saw a party of about thirty of the enemy go into a deep tunnel which led off the trench. He again dashed forward alone, and, having killed one officer and two N.C.O.’s, he captured twenty other ranks. Subsequently he routed, single-handed, another enemy party which was opposing the advance of his platoon. On each occasion he displayed the greatest valour under fire at very close range, and by his example of courage, gallantry, and initiative was a wonderful inspiration to all. This very gallant N.C.O. was subsequently fatally wounded.