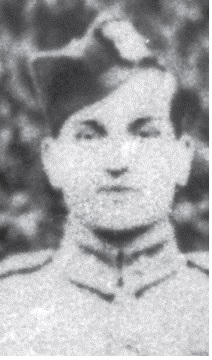 For most conspicuous bravery, initiative and devotion to duty in attack, when, the right flank of the battalion being held up, he realised the situation and rushed forward under intense machine-gun fire to a passing Tank on the left. With his signal flag he walked in front of the Tank, directing it along the trench in a perfect hail of bullets and bombs. The machine-gun strong points were overcome, very heavy casualties were inflicted on the enemy, and a very critical situation was relieved. Later, although wounded, he continued to advance until ordered to get into a shell hole and have his wounds dressed. His valour throughout was of the highest standard.