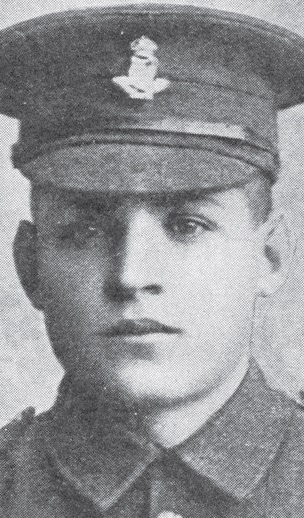 For most conspicuous bravery on the 2nd September, 1918, near Riencourt, when as Acting Company Serjeant-Major, command of the company devolved upon him consequent on officer casualties. Observing that some of our men were surrounded by the enemy, he led a party to their assistance, and by skill and leadership worked his way along the trenches, killed several of the enemy and extricated the party, carrying back, under heavy fire, a wounded officer to a place of safety. Later, seeing a Tank in difficulties, he rushed forward under intense fire, routed the enemy who were attempting to get into it, and prevented the advance of another enemy party collecting for a further attack on the Tank. An enemy machine gun now opened on the Tank at close range, rendering it impossible to get the wounded away, whereupon C.S.M. Doyle, with great gallantry, rushed forward, and, single-handed, silenced the machine gun, capturing it with three prisoners. He then carried a wounded man to safety under very heavy fire. Later in the day, when the enemy counter-attacked his position, he showed great power of command, driving back the enemy and capturing many prisoners. Throughout the whole of these operations C.S.M. Doyle set the very highest example to all ranks by his courage and total disregard of danger.