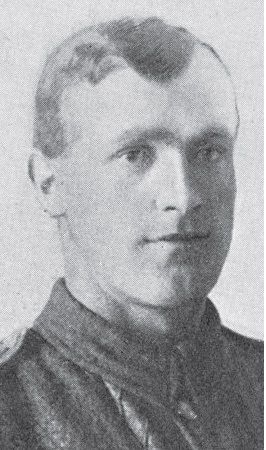 For most conspicuous bravery and devotion to duty when, during an advance, a portion of his company became disorganised by heavy machine-gun fire from an enemy strong point. Collecting what men were available he led them with great coolness and bravery against this strong point, capturing it together with twenty-three prisoners and five machine-guns. Later, he took a patrol forward in the face of much enemy opposition, and established it on important high ground. On another occasion he displayed great heroism by attacking singlehanded an ammunition limber which was trying to recover ammunition, killing three men who accompanied it and capturing the limber. Two days later he rendered valuable services when covering the advance of his company with a Lewis-gun section, and located later on two machine-gun positions in a concrete emplacement, which were holding up the advance of the battalion on the right. With complete disregard of personal danger he rushed forward with a small party and attacked and captured these posts, killing six enemy and taking thirteen prisoners and two machine guns. He was the only survivor of this gallant party, but by this daring and heroic action he enabled the battalion on the right to push forward without further machine-gun fire from the village. Throughout the whole operations his magnificent example and leadership were an inspiration to all, and his courage was superb.